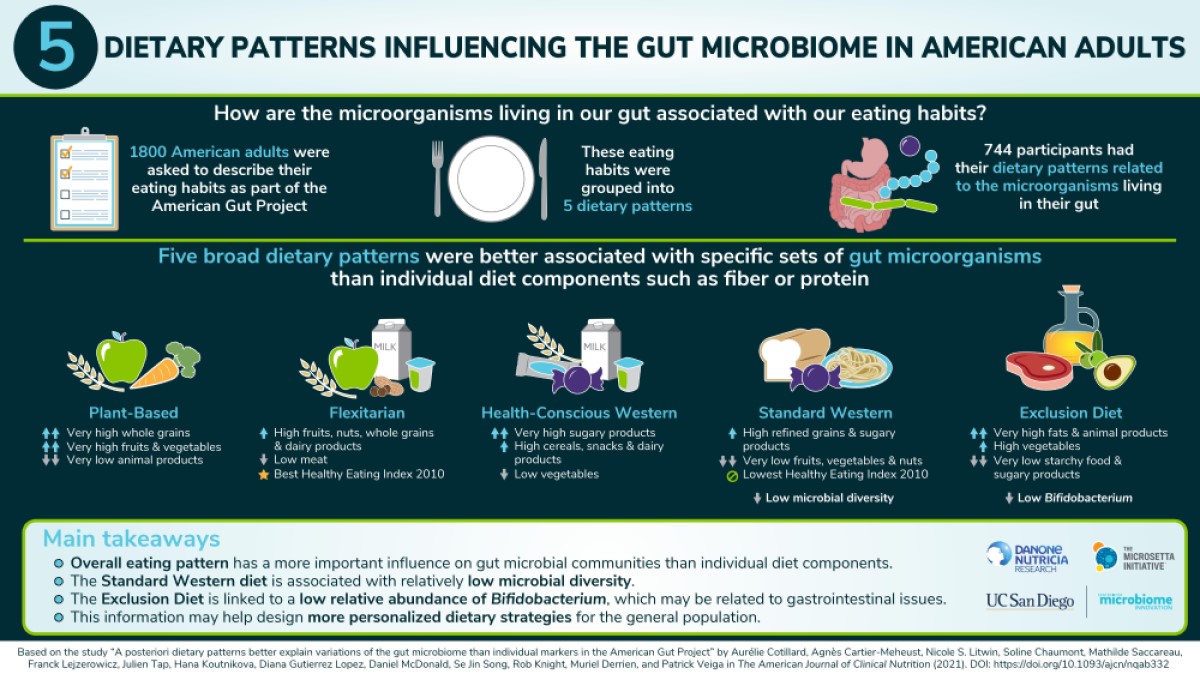 The foods we eat have a wide range of effects on our bodies. They provide energy and nutrients, affect our health, and even bring us pleasure. In addition, our diet influences the composition of our gut microbiome, which has a wide range of implications for our health.

While the fact that our dietary choices impact our gut microbiome is well known, the nuances have been elusive. Individual foods certainly play their part – and either their absence or presence can cause a measurable difference in microbial composition – but that doesn’t happen in a vacuum. Our gut microbiomes are immensely complex environments, being fed and influenced by a variety of diets. With so many variables on both sides of the association, how best to determine the root causes?

To further our understanding of the link between diet and the gut microbiome, Danone Nutricia Research (DNR) and the Center for Microbiome Innovation (CMI) at the University of California San Diego (UC San Diego) set out to study the correlation between dietary choices and microbial diversity. The American Journal of Clinical Nutrition has published their work in an article entitled “A posteriori dietary patterns better explain variations of the gut microbiome than individual markers in the American Gut Project.”

The research was carried out as part of the Human Diets and Microbiome Initiative (THDMI), a collaborative endeavor between Danone Nutricia Research, the CMI, and the Microsetta Initiative. THDMI is a large-scale citizen science project designed to explore the connection between diet and the gut microbiome.

“We know that diet is amongst the main factors that shape gut microbiota composition and function, but there is no scientific consensus on how to best study the association between diet and the gut microbiota,” Aurélie Cotillard (DNR) remarked while discussing the study’s origins. “We therefore wanted to investigate which type of eating pattern – including some based on individual foods and nutrients – would provide the strongest associations.”

Based on food frequency questionnaires completed by 1,800 adults in the American Gut Project cohort, the researchers constructed dietary patterns using both a priori and a posteriori approaches. They then associated those patterns with 16S rRNA-based gut microbiome data for 744 eligible participants and analyzed multiple alpha- and beta-diversity assessments, as well as taxonomic composition.

While a priori assessments that focused on specific dietary choices have historically been considered among the best microbiome-associated indicators, the study’s a posteriori dietary patterns, based on overall diet, showed more influence. Not only did they exhibit more significance in associating diet to microbiome composition, but they also were the only patterns significantly associated with alpha diversity.

“In addition, we would have expected fiber intake to be amongst the best associations; however, overall diet patterns were indeed better associated with the gut microbiota in our cohort,” Nicole  Litwin (UC San Diego) remarked on the findings. “The eating patterns that we obtained were even better associated with gut microbiota than the HEI (Healthy Eating Index) diet quality score, which previously showed as one of the best microbiome-associated diet indices.”

Building on this work, Patrick Veiga (DNR) mentions that the team plans to collect samples from international cohorts, as well as utilize more powerful analytical processes to explore the impact of dietary choices on the gut microbiome more deeply.

“One limitation of our study was the use of the 16S technology to sequence the gut microbiota. This technology limits the taxonomy resolution and the possibility to perform functional analysis,” explained Muriel Derrien (DNR) while expanding upon future studies. “We thus plan to go deeper into the understanding of diet and microbiota interactions by collecting and analyzing shotgun metagenomic sequencing data.”

Publication authors Se Jin Song and Rob Knight are members of the Center for Microbiome Innovation at UC San Diego, a Jacobs School of Engineering agile research center dedicated to advancing the human understanding of the microbiome via interdisciplinary collaborative research.

The Center for Microbiome Innovation Celebrates 17 Members on List of Highly Cited Researchers in 2021
November 17, 2021

E-mail
Go to Top
We use cookies on our website to give you the most relevant experience by remembering your preferences and repeat visits. By clicking “Accept”, you consent to the use of ALL the cookies.
Cookie settingsACCEPT
Manage consent

This website uses cookies to improve your experience while you navigate through the website. Out of these, the cookies that are categorized as necessary are stored on your browser as they are essential for the working of basic functionalities of the website. We also use third-party cookies that help us analyze and understand how you use this website. These cookies will be stored in your browser only with your consent.

Necessary Always Enabled
Necessary cookies are absolutely essential for the website to function properly. These cookies ensure basic functionalities and security features of the website, anonymously.
Functional
Functional cookies help to perform certain functionalities like sharing the content of the website on social media platforms, collect feedbacks, and other third-party features.
Performance
Performance cookies are used to understand and analyze the key performance indexes of the website which helps in delivering a better user experience for the visitors.
Analytics
Analytical cookies are used to understand how visitors interact with the website. These cookies help provide information on metrics the number of visitors, bounce rate, traffic source, etc.
Advertisement
Advertisement cookies are used to provide visitors with relevant ads and marketing campaigns. These cookies track visitors across websites and collect information to provide customized ads.
Others
Other uncategorized cookies are those that are being analyzed and have not been classified into a category as yet.
SAVE & ACCEPT
Powered by